The coming weeks are hard work for artist and educator Victoria Trinder who is officially launching IKTA (which stands for I Keep Thinking About) the creative, collaborative experimental sound network she founded in 2012. Victoria has been busy all year while on her MA Fine Art course at Chelsea College of Art & Design where she has been exploring her sound art practice through collaborating with other creatives including designers, musicians, curators and technicians. Victoria will launch IKTA at a VIP party during the private view for the Chelsea College of Art & Design end of course show on 6th September. Below is an introductory film documentary, during which IKTA members including myself talk about the organisation.

Victoria has been building interactive sound objects, sound sculptures, listening posts and instruments to use in recording and manipulating sound ranging from an underwater microphone to a percussive mechanism housed inside an emptied food jar! Victoria uses traditional modes of composition together with experimental improvisation and she also hosts IKTA as an Internet Radio station that acts as a platform for emerging creative voices regardless of age, gender and cultural backgrounds.

IKTA frequently broadcasts experimental sound sessions online and IKTA is active across all the online social media platforms as well as Sound Cloud where tracks are posted for listeners around the world to comment on.

For the IKTA launch, Victoria has been working on creating a special VIP area on the Cookhouse building balcony which will only be accessible to people that IKTA has collaborated with over the past year. It is a celebration of the work of the organisation but the event will also become a performance piece itself, as the VIP party is watched by onlookers in the Rootstein Hopkins Parade Ground below at Chelsea College of Art & Design during the MA show private view.

There will be special sound performances and recordings being played on the night by IKTA members and throughout the show run and the lead up to it, the space will operate as an open creative, collaborative sound lab for sound experiments, recordings and rehearsals. Victoria has been preparing the area by doing everything from sewing together sails for a canopy in case of rain, putting together hanging baskets of flowers and even a red carpet!

I was lucky enough yesterday to host a live IKTA broadcast and live sound lab in my home where Victoria and I created a sound scape of the IKTA manifesto using saxophone, clarinet and our voices to interpret the text of the manifesto and you can listen to the results below.

I have found being involved in IKTA to be an extremely rewarding experience as IKTA has an open to all policy, meaning that anyone wherever they are based can be involved online or in person and there is no need for any traditional musical training or previous experience of working with experimental sound. IKTA members range from age 17 to those whose practice is based in spatial and technology design or musical education, but all these skills and different backgrounds are united to experiment with sounds together.

For me, in my own curatorial practice, I have always been fascinated by the alternative side of music, leading to sound art. So when I met Victoria and months later, when I became curator at Notting Hill Arts Club, I was thrilled to be able to invite IKTA to perform a live sound lab session at the launch of my multi arts series at the venue, which you can read about here. 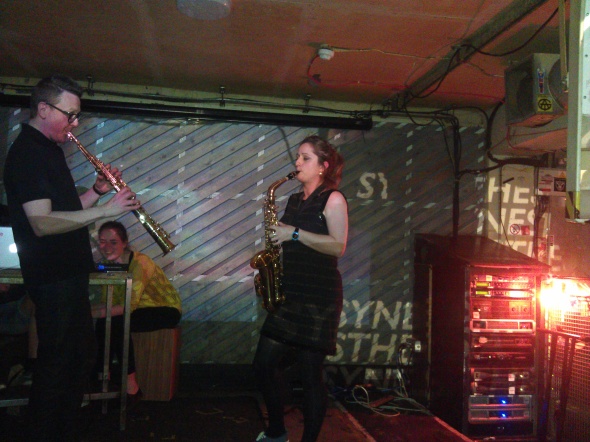 Although I am a classically trained singer, IKTA has allowed me to explore a different side to music making which is less rigid and prescribed. I was even convinced to play clarinet which I haven’t done for years and I have also tried experimenting with spoken word! Click here to see a Vine Video of me rediscovering my clarinet and its thanks to IKTA that I’ve started to use Vine too, which is a mobile app owned by Twitter that enables its users to create and post short video clips.

Here’s to the official launch of IKTA and its future!

Chelsea Salon Series – 2nd salon from me – the Curatorial Associate

As an organisation we have now clarified our roles in order to better demonstrate the work we are carrying out, to the University and external organisations including galleries and possible funding groups. I am the Curatorial Associate for the Chelsea Salon Series and I have been working on organising the next salon event which will take place on 3rd August 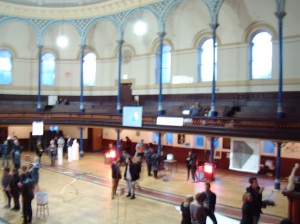 an image from the last salon for Chelsea Salon Series held at the Round Chapel, Hackney

The next salon will take place at Harts Lane Studios and I am working together with MA Fine Art Chelsea College of Art & Design alumni Fiona Whitty and Jenny Gordon (who run Whitty Gordon Projects) to carry out this event.

image from Whitty Gordon Projects, during one of their visits to downtown Kingston, Jamaica
http://whittygordon.tumblr.com/images/

A curatorial decision was taken to create an experimental salon with an emphasis on performance and a full range of art forms. The Round Chapel salon allowed students to show any completed work or works in progress and most students exhibited pieces they were working on or had already finished, in a way staying quite safe in their choices.

This next salon will enable students to be inspired by the experimental way of working that Fiona and Jenny employ, using a variety of interesting and exciting ways to realise their ideas in different art forms including film, video and outreach projects. The Chelsea Salon Series team would like to capture the adventurous and experimental spirit of the Askew events (set up by Fiona Whitty and Jenny Gordon and no longer in action, although the website remains as an archive of the collective’s activities) and first salons held at Chelsea College in the year that they took their course (2009).

This means that this salon will be open and encouraging. There is no specific theme, but the aim is for students to be experimental, risk taking and daring. We have made clear that this means the work doesn’t have to be pieces that students are working on at the moment. It doesn’t have to be something that is finished and final. We have suggested trying working in a different format or media or with subject matter other than what students usually use. Eg. what about using dance, music, poetry if you don’t usually, or cooking something new you haven’t tried before! We really want to encourage performance and interaction.

We have recommended thinking about those ‘60s and ‘70s ‘happenings’ which embraced the experimental and free thinking zeitgeist… I’ll let you know after the event, how it goes and if we managed to make our very own Chelsea Salon Series happening!

Our salons are open to the public, so you are most welcome to join us. All information is posted on the Chelsea Salon Series blog.